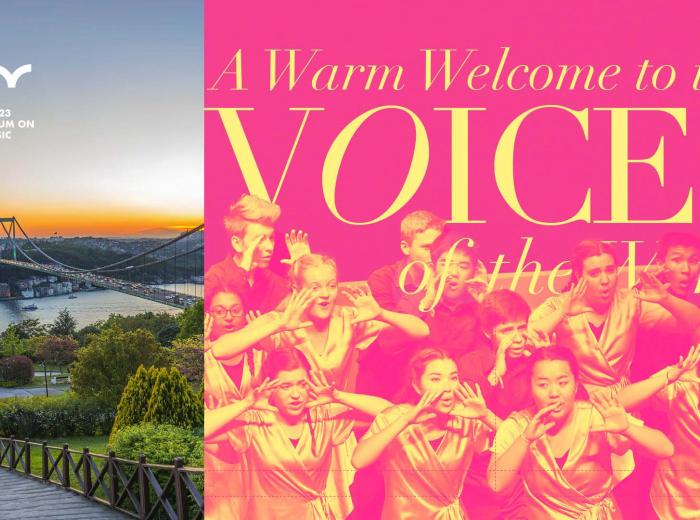 Here is the news that the IFCM community has been waiting for - the invited choirs for the WSCM 2023 Istanbul:

Selected for their artistry as well as their concert programing’s connection with the symposium’s theme “Changing Horizons,” each choir is an outstanding representation of its region and style. The IFCMeNEWS will feature all the WSCM 2023 choirs over the next few months. First to be highlighted are the professional choir, Estonian Philharmonic Chamber Choir, and the choir with the youngest singers, Leioa Kantika Korala.

The Estonian Philharmonic Chamber Choir (EPCC) is one of the best-known Estonian music ensembles in the world. The choir was founded in 1981 by Tõnu Kaljuste who was its artistic director and chief conductor for twenty years. Followed by collaborative leadership with Paul Hillier, Daniel Reuss, and Kaspars Putniņš, Tõnu Kaljuste has returned as artistic director and chief conduction as of this season. A lifelong guest at many respected music festivals around the world, the EPCC has a wide recording repertoire and is a two-time GRAMMY Award winner with an impressive total of 16 GRAMMY Award nominations. It is not surprising that BBC Music Magazine (2020) named the EPCC as one of the best 10 choirs in the world.

Leioa Kantika Korala, with its 50 young singers ages 11 to 20, was founded in 2000 at the Leioa Municipal Conservatory by conductor Basilio Astúlez. The conductor and choristers pride themselves in exploring the widest possible variety of styles and repertoires. They have performed in numerous international festivals and have toured the world over, winning many prestigious awards at competitions in Arezzo, Gorizia, Neerpelt, and Rimini.

Le Chant sur la Lowé aims to popularize the Gabonese musical heritage through the interpretation of a diverse array of Gabonese folksongs in all the languages of the country. Its uniqueness also translates into its folkloric costumes and its signature choreographies which represent the rich Gabonese cultural heritage. They have sung in festivals all over the world, winning many international awards, and regularly present public and private performances in their country and region.